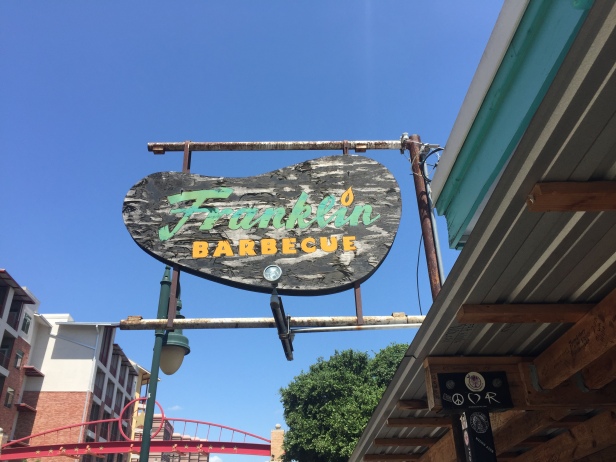 We have got about a week here, but the first thing that I had to do, was get to Franklin Barbecue. I have been kind of obsessed with this place for a few years, after catching a show about it on TV when on holiday, I have even followed to the letter his ribs – documented here. It is the pinnacle of BBQ in Texas. Aaron Franklin is an, absolute BBQ legend his brisket is known as being some of, if not the best, in the world, and he has made Franklin the BBQ place to visit – and the queues testify to that.

Luckily, we had planned to visit Franklin on a Wednesday which was the best day to visit, it would be relatively quiet and we should be all good to get in there. This place is only open ‘lunchtime’ well 11am until they sell out (which tends to be about 3pm). The kicker – to get in there in good time, you need to get there early!

So the alarm went at 7, I was up, dressed and ready by 7.30 and we wandered down, ladened with water, books and suncream. Arriving at 7.45 we weren’t the first, but pretty close to it. We grabbed a couple of chairs they have ready and settled in for the next 3 and a quarter hours (a ridiculous amount of time to wait!).

Luckily coffee was available around the corner in this great place – who use the same coffee as Franklin’s espresso BBQ sauce.

So I was about the 15th person in the queue – not bad going for an out of towner! By about 8.30 the queue was snaking miles back

This was the nicest queue I have ever been in, which of course I approved of being from the UK – the worlds best queuers! Staff opened the doors so we could use the restrooms, gave us water and thanked us for coming out! They even came round with some beers – which were greatly appreciated, even if it was 8 in the morning!

After 3 hours, excitement was growing, the smell was so good it was becoming unbearable and we all needed to get in there – and 11 on the dot they obliged opening the door and we all piled in. Inside, it is what you would expect, no frills, a little run down, but with loads of character and charm.

We were in! We picked up a t shirt for Jen and me, and a cap (I’m a sucker!) and before I knew it we were at the front of the queue, faced with the burning question, what to order? Franklin, sticks to the classics – world famous brisket of course, pulled pork, pork ribs, turkey and sausage – and his insane looking sandwiches

I wanted to try it all … so I did. I went for 2 pounds of brisket (half fatty, half lean), half a pound of pulled pork, half of ribs, a quarter of turkey and a sausage. A huge amount of food, but I wanted some to take home – who wouldn’t want brisket for breakfast?!

They cut to order, and just seem to have an unending amount of brisket and ribs, that they pull from the smoker, wrapped in foil and ready to go:

As I said, it was a crazy amount of food we ended up with: 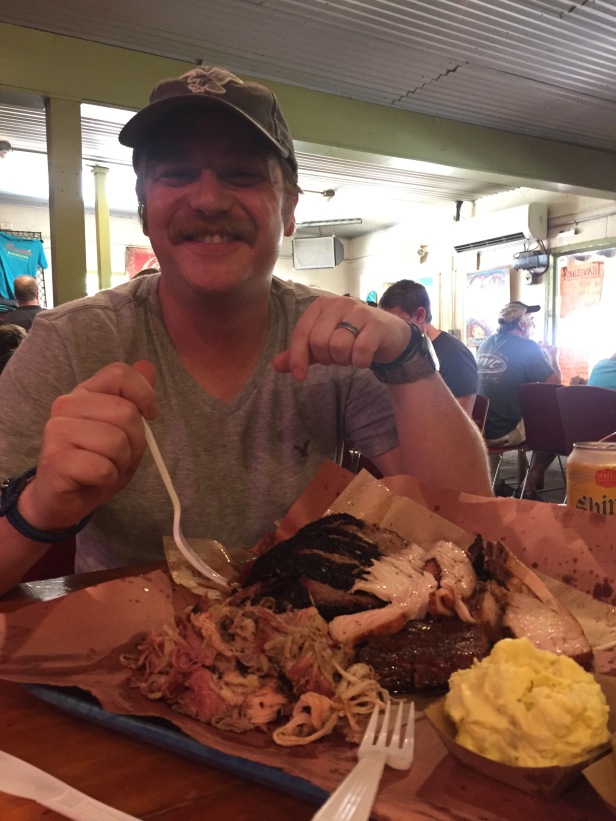 To begin with – it was all, as expected delicious, and yes well worth the 3 and a half hour wait!

The ribs fell apart as soon as you picked them up. I have tried his recipe and written about it here. Mine were nowhere near. The pulled pork was really good, really smokey, rich and only needed a touch of the BBQ sauce (of which there were 3 to choose from – classic, espresso and an unidentified one).

I ummed and ahhed about getting turkey, and boy am I glad I did. This was amazing – as with the chickens I have smoked, white meat is great on the smoker as it gets such an intense smoked flavour and stays moist. I noticed that most people were ordering the turkey and I can see why, it was fantastic – and I will be definitely trying to smoke a turkey this year!

But really this was all about 1 thing, and that was brisket, that was why we had queued and why we (I) had flown over here – and it didn’t disappoint. I find it hard to get the right words on this, it was truly awesome, the fatty part was so moist it melted in the mouth, pick up a piece and it practically fell apart – so ridiculously juicy. The leaner part needed the faintest touch of a knife to break it apart – but this was where the flavour was – intensely smokey, deeply beefy in flavour and with a slight bite, this was incredible. I can’t choose which bit I liked most, a little of the fatty part was enough, but I could eat a lot of the leaner part (lucky considering how much I bought!). Truly the greatest brisket I have or probably ever will eat – Life Changing, I think they might well be!

So that’s Franklin folks, dinner and brekkie will be consuming the left-overs, then in 2 days time I will be off to Salt Lick to try out their beef ribs, which our neighbour in the queue today said were incredible, tune in for more soon!

One thought on “Franklin Barbecue”